The museum of anthropology in Mexico city holds many fascinating facts but probably the most interesting one when you compare modern-day Mexico city and the information held inside the museum; is the knowledge that Mexico city was almost exclusively made of rivers and lakes, most of the ground is now soft sand – which may have contributed to the damage done in the most recent earthquakes ( Which were not fun to experience ) 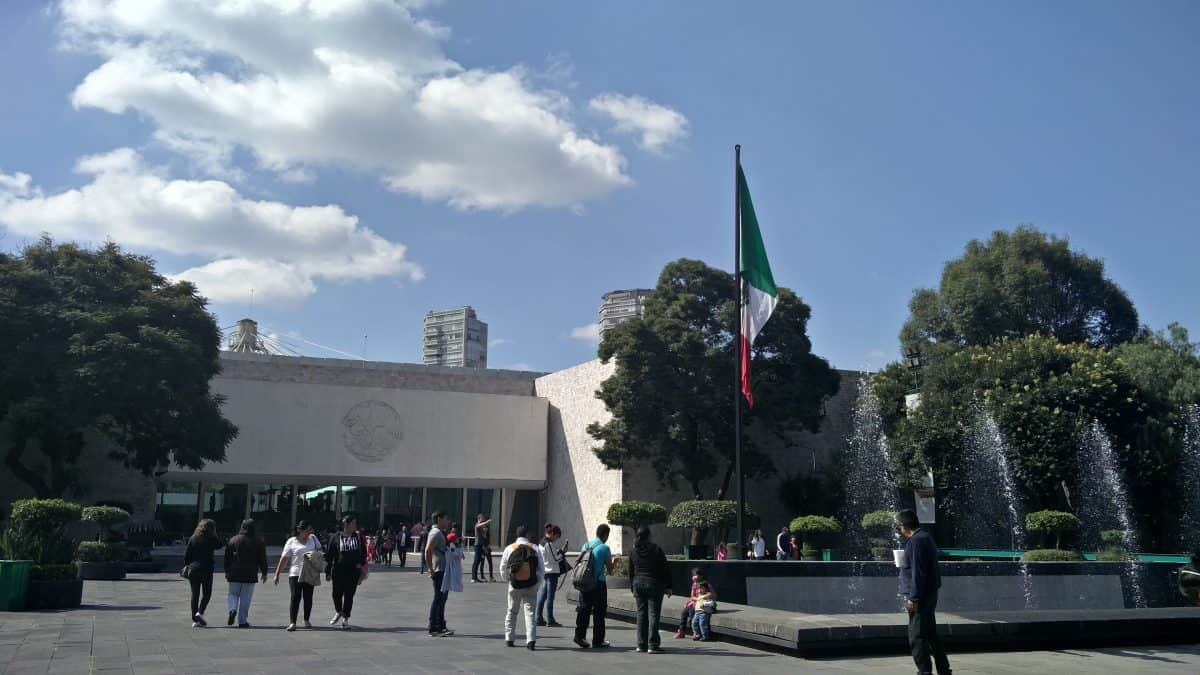 The early citizens of Mexico had traveled most often by boat and whilst they would not have resembled the modern day Trajinera ( clothed roof, seats & chairs etc. ) They were a vital means of transport. Then came modern methods of drainage systems which meant the rivers and this method of travel more or less died outside of Xochimilco.

I had seen the Trajineras last year decorating the city center amongst other artwork celebrating the day of the dead. In my below Instagram post, you can see one such example

So it was a fun experience to visit Xochimilco, a famous area of Mexico City which still has hundreds of Trajineras on its rivers. The location is quite hard to find if you don’t have a Mexican guide or the exact location with a sat nav. However, there are quite a number of local guides on bicycles roaming the roads and more than willing to show you the location for some pesos. Luckily enough we knew where we were going.

There is plenty of car parking available nearby & there are lots of local markets selling interesting trinkets and tourist items. The Trajineras themselves are decorated often with foreign flags and girls names, likely to draw in more sales to those particular boats if they’re a match to the tourist in question. 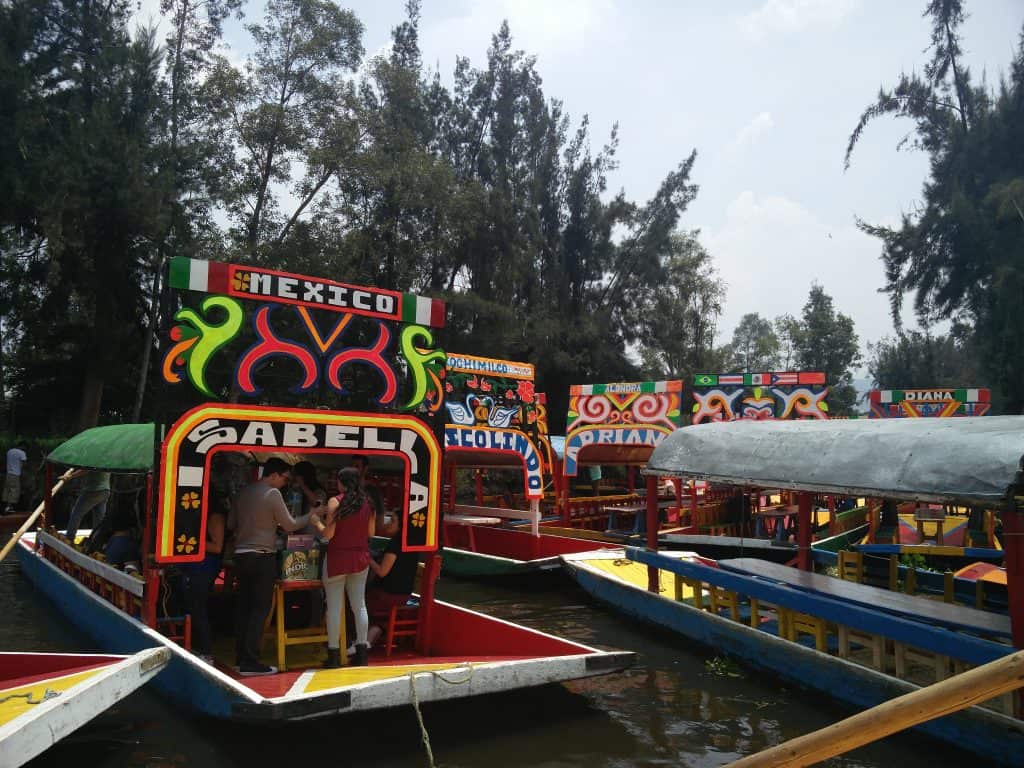 The area is lively during the weekend in which the river and Trajineras are like an all-day party. You can bring your own food & drink and rent a boat for a full day partying. 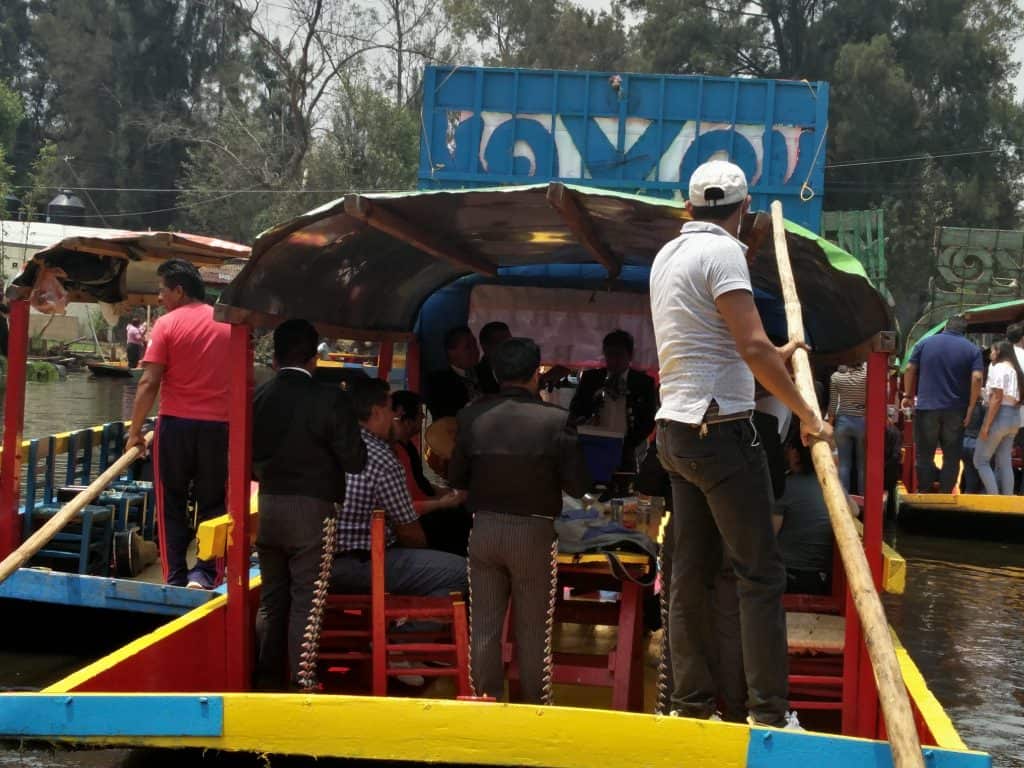 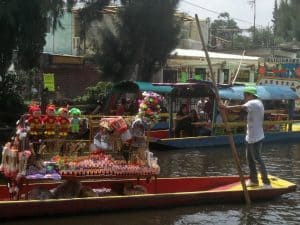 If you do run out of food or drink, then that’s no issue either as there are vendors everywhere trying to board your boat to sell you anything. At times this could be annoying as peace and quiet is not to be found on this river during the weekend but a ‘No Gracias’ is often enough.

With this knowledge, if you ever do decide to visit, just remember during the week = relative peace and quiet and perfect for a tour, weekend = fiesta time.

The upside to this party atmosphere was the general good spirits of everyone around. There were lots of drunk girls singing and dancing on their boats. We even had a partygoer board our boat to discuss the upcoming McGregor fight against Mayweather that night that he had bet a thousand pesos on. ( He lost )

There was lots of local music being played and thanks somewhat to the acoustics of the river, this didn’t seem to overlap, you could hire mariachis or numerous other musicians to play you a song by calling them over. 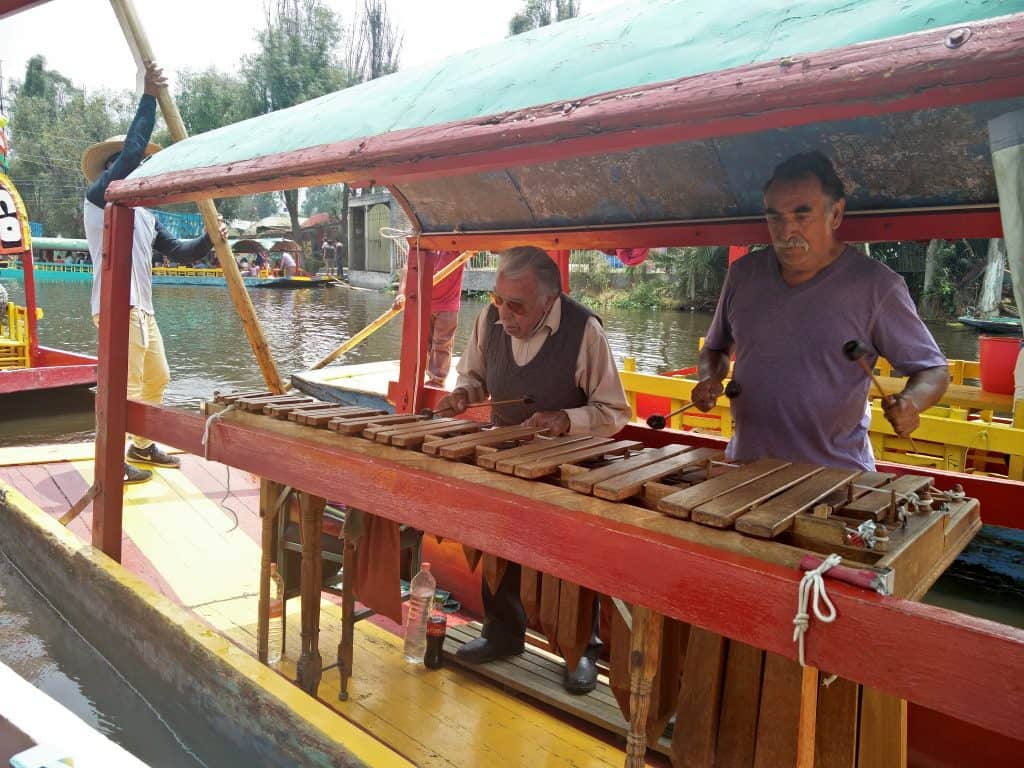 I had not been forewarned about the next creepy thing I witnessed on this journey however when I noticed the nearby trees had various dolls attached to the nearby trees. Most of which looked old and very creepy. I was informed of two things,

“It is said that a girl was found drowned in mysterious circumstances many years ago on this island and that the dolls are possessed by her spirit.

Local legend says that the dolls move their heads and arms and even opened their eyes.

Some witnesses claim they had heard the dolls whispering to each other, while others who were on a boat near the island said the dolls lured them to come down to the island.

Of course, these witnesses are exaggerating and the island is in no way possessed but the truth is that the Isla de las Munecas is a very creepy place that marks the casual visitor.”

You can read more if creepy possessed dolls are your thing or you’re interested more in the Isla de las Muñecas at this website – http://www.isladelasmunecas.com/.

The second part I was told, is that these dolls were not the original dolls hung up nor were we near the island, it was purely a tourist photoshoot, the actual island was a few hours from our location and back so we didn’t have time and seeing creepy dolls wasn’t high on my to-do list. 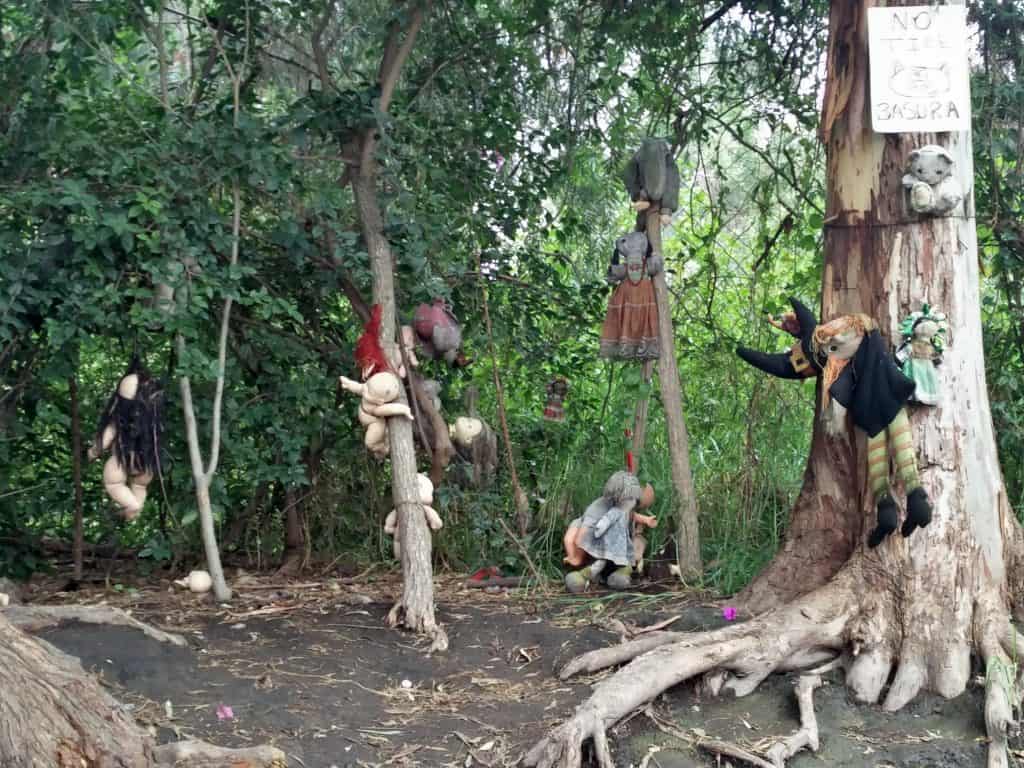 In summary, Xochimilco is well worth a visit and has some interesting history behind it. If you’re interested in exploring the river or visiting the creepy island of the dolls, it’s probably best to visit during the week. If you want the party environment, go during the weekend and bring plenty of beer. There are toilets at local mini ports down the river so don’t worry about not bringing too much beer!